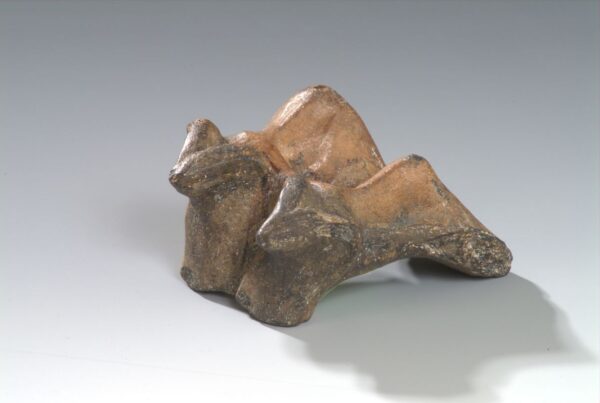 In the Neolithic (New Stone Age) farming and animal husbandry became the main methods of obtaining food for the first time. The expansion and development of agriculture in the Lublin region coincide with the period of the funnel-beaker culture (3600–2600 BC). Important discoveries were made on the sites of the Neolithic culture, which was best known in our region, which related also to the management methods of that time. The most spectacular find comes from the settlement in the town of Krężnica Jara, in the Lublin district.

The object showing a pair of oxen in a yoke is a fragment of an ear of a hand-made clay jug. This is a unique example of prehistoric figural art, as not only the silhouettes of animals are shown, but also the yoke is placed on their necks. The figurine is 8 cm long, 4 cm high, the width of the yoke connecting them is 4 cm.

The find, unique on a European scale, is considered by many researchers to be one of the evidence that the people of the funnel-beaker culture used a new agricultural technique – ploughing with a wooden plough pulled by oxen. It allowed to cultivate vast, previously undeveloped areas outside the river valleys. It should be assumed that the animals tied by a yoke were also used to pull four-wheeled carts, the schematic drawings of which are sometimes found on the vessels of this culture.

The sculptural ears of jugs and mugs are one of the expressions of the artistic skills of the local potters living in the Lublin region in the 4th–3rd millennium BC. Their economic importance was emphasised through the visual images of the farmed animals. Such vessels probably had a special, symbolic character, serving our ancestors as ceremonial ceramics.

The monument, discovered in the interwar period, presented in a publication by Stefan Nosek in 1947, is now exhibited at the permanent archaeological exhibition Tracing the Past. The Ancient History of the Lublin Region.