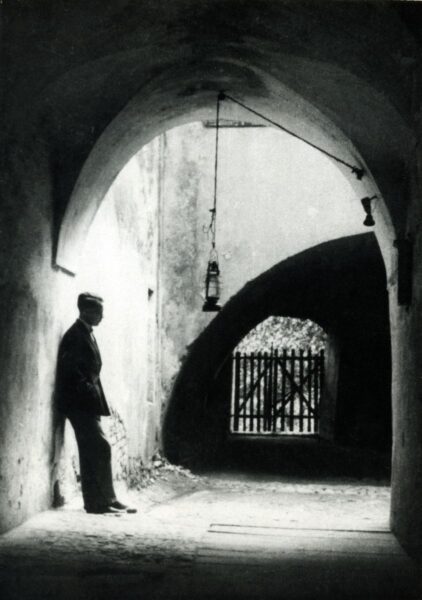 Józef Czechowicz is one of the greatest Polish poets of the 20th century. His work, immersed in the aura of provincial Lublin, saturated with idyllic visions, and at the same time full of catastrophic intuitions, became a model for subsequent generations of artists.

Czechowicz is known primarily as a poet, but his output also includes prose, drama, works for children, essays and journalism. He was also fascinated by the new media; he wrote radio and film texts, and devoted attention to the popular culture of the time.

He was born on 15 March 1903 as the youngest of three children of Małgorzata née Sułek and Paweł Czechowicz. His parents came from the countryside, his father worked as a bank janitor. In 1913, Józef enrolled in an elementary school, which he graduated in 1917. He continued his education at the Teachers’ College. For several months in 1920 he took part as a volunteer in the Polish-Soviet war. After returning from the front, he worked in a school in the borderlands of Poland. In 1926 he got a job in a special school in Lublin, and later became its principal. In 1930, he went on a scholarship to France.

In 1933, Czechowicz moved to Warsaw. From 1938 until the outbreak of the war, he worked in the editorial office of the Polish Radio. During these years, he created theatrical plays, radio plays, most of the works for children and many translations. He was the first to translate into Polish fragments of Ulysses by Joyce, poems by T. S. Eliot, and also R. Kipling, W. Whitman, A. Rimbaud, G. Apollinaire, J. Seifert, A. Błok, W. Blake and many other. He wrote essays, journalistic articles, and edited literary supplements to Lublin and Warsaw magazines. After the outbreak of the war, Józef returned to Lublin, where he died on 9 September 1939, during a German air raid.

He made his debut as an artist in the Lublin magazine “Reflektor” in 1923. A few years later, his first volume of poetry was published – Kamień (Stone, 1927), well received by literary critics. In the following years, he published the collections: dzień jak co dzień (day like every day, 1930), ballada z tamtej strony (a ballad from the other side, 1932), w błyskawicy (in a flash, 1934), Stare kamienie (Old stones, 1934, together with Franciszka Arnsztajnowa), nic więcej (nothing more, 1936), Arkusz poetycki (Poetic sheet, 1938) and nuta człowiecza (human note, 1939).

In 1934, one of Czechowicz’s most famous texts was written, Poemat o mieście Lublinie (Poem about the city of Lublin). It includes poems combined with poetic prose and enriched with the soundtrack proposed by the poet. The text was broadcasted as a radio play by Polish Radio.