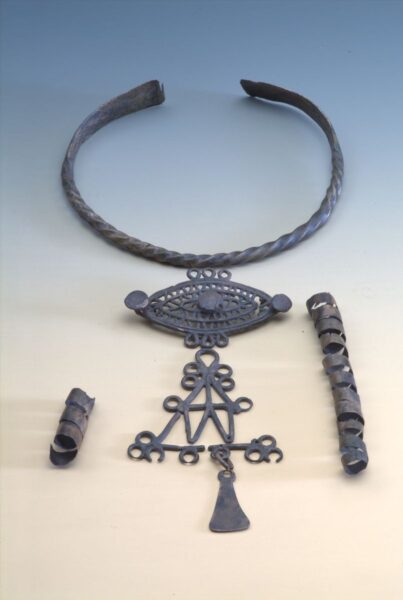 The group of bronze ornaments from Wakijów

The area of the Lublin region from around 1100 to around 400 BC was occupied by the Lusatian culture. Despite the fact that, as before, the basic raw materials for making tools and ornaments were stone, bone and wood, bronze products became more and more frequent, and the craftsmanship of their making was getting more developed.

In 1952, an inhabitant of the village of Wakijów, in a nearby meadow, in the old bend of the Huczwa River, at a depth of about 1 meter, found bronze ornaments. According to the discoverer, there were also human bones next to the items. During an on-site visit, conducted by prof. K. Jażdzewski, only one finger bone was discovered.

The set of bronze ornaments found consists of a necklace made of a quadrangle rod twisted around its axis, both ends of which have been flattened, a two-piece ornament composed of an openwork fibula and an openwork triangular pendant with one preserved pendant, and a spiral ribbon that during the discovery was wound on wooden bar. The items were made by casting and forging.

Traces of repairs discovered on a triangular pendant and severe abrasions of all ornaments prove long-term use. Their chronology should be determined for the Early Iron Age, the Hallstatt period (600–500 BC). Most likely, the ornaments excavated by the finder 2,500 years earlier belonged to a woman who drowned in a swamp. Their basic dimensions are: the longer axis of the necklace – 175 mm, the width of the shield – 90 mm, the height of the pendant – 140 mm, the length of the spiral – 185 mm.