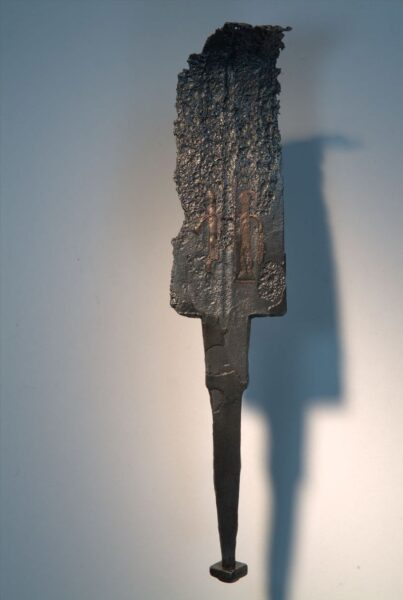 At the end of the 2nd century CE wars waged on the northern border of the Roman Empire and the migrations of Gothic tribes from Scandinavia through Polish lands towards the Black Sea influenced the cultural situation in the Lublin region. The representatives of the Wielbark culture, identified with the Goths, began to displace the existing inhabitants of our region – the people of the Przeworsk culture, identified with the Vandal tribes. The tomb of a Vandal warrior discovered in Podlodów is a testimony to the fights between refugees and newcomers. Next to the urn with his remains, his weapon was placed, including an iron sword with a copper inlay.

This unique weapon at the beginning of the 3rd century CE probably became the property of a warrior belonging to the elite of the Przeworsk culture population. The sword from Podlodowo is the most interesting element of the armament set which also consists of: an umbo (shield boss), made of iron and copper, two iron spurs, two ritually bent and broken iron spear heads, a bronze knob – a fitting (?) as well as a bent spear tip with a silver inlay on an iron leaf and sleeve in the form of symbolic signs and lines.

The sword is double-edged, with a straight pommel, with 4 fullers. The pommel at the base is decorated with a copper inlay – a figural representation of deities, Mars and Victoria. In order to highlight the details of the drawing, the inlays are supplemented with dots and engraved lines. The sword was ritually bent. It is currently broken into four parts.

Most swords of this type can be treated as imports from the Roman Empire. These are especially objects with a stamp or inlay and those with fullers, which proves the high technique of production. They fell into the hands of the barbarians by way of robbery or as loot captured in battle.