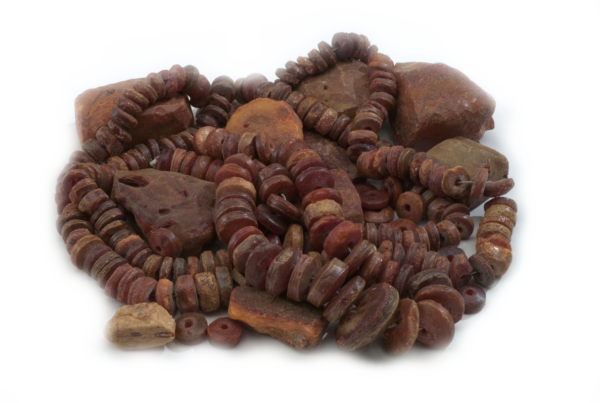 The treasure of amber from Basonia

Hun invasion in 375 CE initiated great changes on the political and ethnic map of Europe. The period of migration of peoples began. In our region, a collapse of settlement with the traditions of the Roman period was observed. The evidence of the unrest during this period are, among others, treasure finds.

Among them, the treasure of amber from Basonia, which is one of the largest finds with ready-made amber products known so far, is of exceptional importance. It consists of beads and raw amber. Around the middle of the 5th century AD it was moved to the vicinity of Basonia, probably during a transport on the Vistula river from the Baltic Sea. The exact place of its discovery is unknown, it was made by accident in 1914 and described in the literature only after 23 years. According to the finders, the treasure contained about 300 kg of raw amber lumps and about 30 kg of ready-made beads. Currently, the collection of the Archaeology Section of the Lublin Museum includes 253 amber beads, 11 lumps of raw material and more than a dozen of fragments of beads.

The amber – succinate – is from Baltic. The beads belonging to the treasure from Basonia were made with the use of a lathe. Due to their various shapes, five types can be distinguished. The most characteristic are discoid, convex beads, often referred to as the so-called Basonian type. Some are plain undecorated. Others have an ornament in the form of circumferential furrows. The traces of processing were preserved very well on the products. There are no signs of use, which proves that they were hidden in the ground shortly after production. This confirms the merchant nature of the treasure.