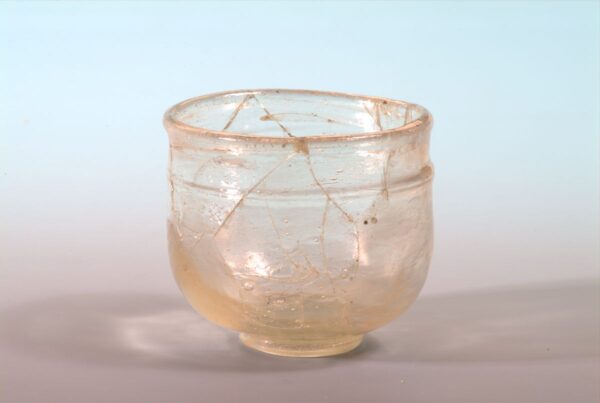 A small vessel made of glass was discovered in the grave of a representative of the so-called Masłomęcz group. It is a local cultural group inhabiting the Hrubieszów Valley from the end of the 2nd to the turn of the 4th and 5th centuries AD. It belongs to the circle of cultures identified with the Goths who travelled from Pomerania, through the Lublin region, to the Black Sea.

Glassware was a luxury commodity in antiquity, and the technique of their production was one of the best kept secrets. In Poland they exist as imports and are proof of the commercial contacts of “barbarian” cultures with the ancient world. The area of ​​the Masłomęcz group was an intermediary centre in this trade.

The vessel from Werbkowice-Kotorów is one of only a dozen well-preserved ancient glassware found in the Lublin region. It comes from a grave dating back to the end of the 3rd or the beginning of the 4th century AD, which contained the skeleton of a child (about 13-year-old girl) and accompanying, in addition to the vessel, grave gifts: 9 vessels (of which 7 represent high-class pottery made on a wheel), a clay rattle , silver clasp, as well as animal bones (including rooster and pike). The small glass vessel, only 5.6 cm high, is almost complete. It is made of transparent, colourless glass with a slightly yellowish shade. In the manufacturing process, the method of blowing in a rotating mould was used. The decoration was achieved by sticking hot glass thread on the shaped vessel.

Similar examples can be found in the Roman provinces on the Danube, for example in Dacia. Such vessels were also produced in the Chernyakhov culture area in the Dniester basin.