Legend of the Mountains

For the first time in the Gallery of Polish Painting of the 19th and 20th centuries, a painting by Kazimierz Sichulski, entered in the inventory book as Legend of the Mountains or Freedom of the Mountains, was presented. It was painted in 1923 in Vienna. It is an unrealised design of a mosaic for the facade of the Polish pavilion for the International Exhibition of Modern Decorative and Industrial Arts in Paris in 1925. It was added to the Museum’s collection in 1972. It was purchased from a private owner. 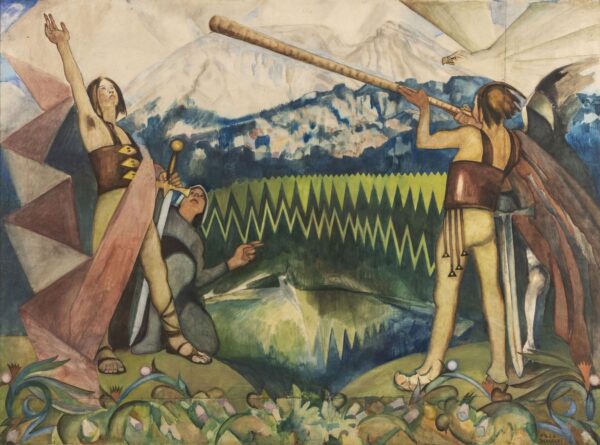 Freedom of the Mountains is a large-format painting, 134 x 178.5 cm in size, painted on paper, in the gouache technique. The composition shows four figures against the background of a s

chematic mountain landscape. The artist, painting a symbolic scene, alluded to the legend of knights sleeping under Giewont, according to which, the knights are to rise up and defend the Polish land when it is in danger.

The poor condition of the painting was mainly due to the storage conditions: moisture and improper rolling – face inwards. The artist obtained a multiplicity of the base by gluing several pieces of paper of one kind, but in different cutting directions. In order to strengthen the base obtained in this way, it was glued with a bookbinding technique on a cotton canvas. The glue originally used was paste (klajster). The deformation of the base was caused by stresses between the pieces of paper glued together. The object was very crinkled and deformed. The paper was locally peeling off the canvas reinforcement, and numerous vertical and horizontal paper wrinkles with abrasions of the paint layer were visible on the entire surface. There were tears and small losses of paper at the edges. The painting was very dusty and dirty, mostly on the surface.
The priority of the restoration work was to counteract the deformation of the painting’s base. Due to the high sensitivity of the object to humidification, the procedures requiring the use of water were reduced to a minimum in favour of safe measures.

After initial straightening by weighting, the painting could be cleaned of dust and surface dirt. The old double cloth and the adhesive layers were disassembled. It was then possible to perform a multi-stage straightening procedure on a low-pressure table. The paper structure was strengthened by sticking tears and filling in losses. The object was put on a new canvas base, which was made without introducing moisture into the object, on a low-pressure table. Long-fibre tissue paper, saturated with glue, constituted an interlayer between the paper base of the painting and the duplicate canvas. The glue was activated by heat. The painting required stabilisation of the base under load while waiting for a self-tensioning loom. In order to improve the display value in places of mechanical damage, coloured retouching was made to integrate the painting layer.

The work was shown after the completion of restoration works, in 2018 at the Royal Castle in Warsaw, at the “Signs of Freedom. On the endurance of Polish national identity” exhibition. Thanks to the cooperation with the organiser of the exhibition: the painting could be stretched on a special loom by Henryk Arendarski, the face of the gouache was secured with an organic glass pane, and the whole was framed in a frame inspired by mountain art by sculptor Krzysztof Frys.