Among, the collection of the History of Lublin City Museum, seven photographs taken by T. M. Dagajew ca 1900 deserve special attention. The author’s professionalism is confirmed by the artistry of photographs. Despite searches in the collections of the Lublin Museum (today the National Museum in Lublin), the State Archives in Lublin, the Hieronim Łopaciński Voivodeship Public Library in Lublin, the Museum of Photography and the National Museum in Warsaw, we were unable to obtain any information about the photographer. All views of Lublin were glued onto cardboard 15.5 x 20.5 cm and decorated with a stylised gold-coloured printed frame. Each photograph has a signature in Russian, printed in the same colour, “T. M. ДАГАЕВЪ”.

At the beginning of the 19th century, at the intersection of Krakowskie Przedmieście and Czechowska streets (now 3 Maja), a complex of buildings of the Lublin District Commission was erected – a customs house and a weighing room. The author of the design of the neo-Gothic buildings was Jan Stomph. The preserved fragment, visible from the modern Żołnierzy Niepodległej Street, is an important example of a building erected for administrative purposes at the beginning of the Congress Poland. In 1912–1914, the building of the State Bank of Russia, known as the State Bank, was built, designed by Włodzimierz Sołowiow, in the place of the customs house. Today the building is the seat of Santander Bank SA. 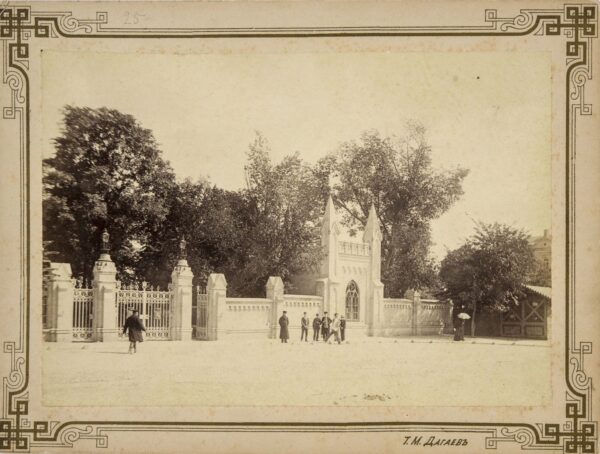 The municipal garden was established in 1837 on the post-Dominican area, according to the design of Feliks Łodzia Bieczyński. It was the second attempt to create such a park in Lublin. Earlier, on the initiative of Ignacy Lubowiecki, President of the Lublin Voivodeship Commission, a garden was created in the northern district, between Lubartowska and Szeroka Streets, which does not exist today. The plants were damaged by floods and devastation. The date when the park was founded is commemorated with an obelisk with inscription. The hilly terrain was partially levelled, trees, bushes, lawns and flower beds, e.g. with roses, were planted. The garden, called from around 1860, in the Warsaw fashion, the Saxon Garden, was an example of an English-style establishment. Among the installations and park elements, a gazebo and a fountain were of note. A sundial, for which the compass was made of gilded cast iron, was found interesting. A barometer with a thermometer and a personal scale was also installed in the garden. In 1900, a pond was created. Initially, the fence of the Saxon Garden was composed of a moat planted with trees. In 1889 it was replaced with a wall. At the same time, a neo-Gothic gate was built. Next to it, there is the doorman’s house.

Podwale Street and the Basilica of the Dominicans

In the Middle Ages, in Lublin, as in every city surrounded by walls, at the foot of the Old Town hill, a street called Podwale was formed. From one side, it ran along the city embankments, and on the other – along the edge of the Great Royal Pond. As early as in the 16th century, noble manor houses began to appear along its upper course, and from the 19th century – industrial buildings, incl. groats factory and brewery. The Dominican Church founded by Kazimierz the Great towers over the street. It was erected on the site of a wooden chapel built by Dominicans who came to Lublin in the mid-13th century. King Zygmunt Augustus, due to the grandeur of the temple, chose it as a place of thanksgiving Te Deum after signing the act of the Union of Lublin in 1569. In 1575, as a result of a fire, the temple was largely destroyed. Reconstruction began only at the turn of the 16th and 17th centuries. Remains of the Gothic development prevailed. In addition to the new vaults and the top in the Lublin Renaissance style, a dozen chapels were built to enrich the shape of the building. In the temple, next to historical mementoes, the most important Christian relic was kept – a fragment of the Holy Cross Tree. In the mid-17th century, a chapel was built especially for keeping the relic, designed by the Lublin bricklayer, Jan Cangerle. It is decorated with, among others, frescoes by Tomasz Muszyński and Albin Kuczowicz and paintings by Tomasz Donatella. After the dissolution of the Dominican Order in 1864, the church was handed over to the secular clergy. In 1938, the monks regained some of the buildings. In 1967, Pope Paul VI elevated the church to the dignity of a minor basilica. This act coincided with the 750th anniversary of the arrival of Dominicans to Poland. 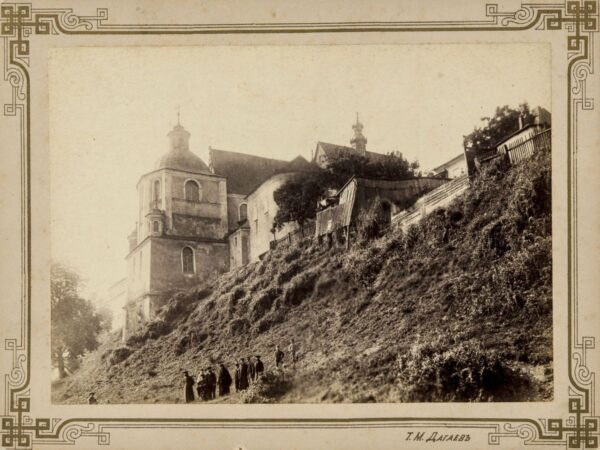 Church of the Transfiguration

The temple is one of the churches in Lublin that has remained unchanged. The founder of the church and monastery for missionary priests is considered to be Anna Zbąska née Stanisławska, the first Polish poet. The foundation was implemented by Jan Tarło, the Lublin voivode. The late-baroque church of the Transfiguration, built on a Greek cross plan, was created according to the design of Fr Mikołaj Augustynowicz. The interior is generously equipped. The paintings by Szymon Czechowicz from the 1730s century deserve attention. From 1714, missionary priests ran a theological seminary in the buildings. As a result of the dissolution of the monastery in Lublin in 1864, the church was taken over by the diocesan clergy. To this day, the temple remains the church of the diocesan Major Seminary. 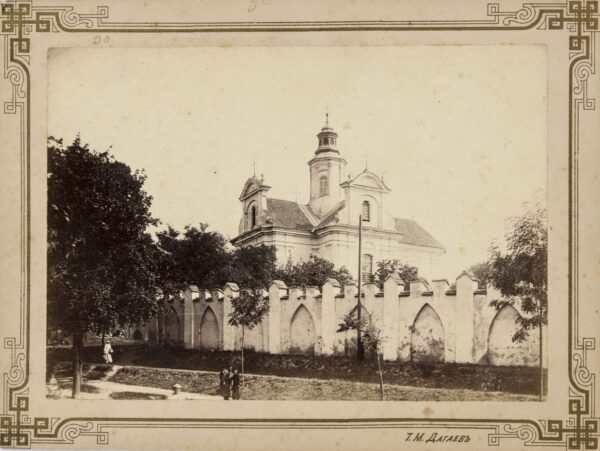 The Lublin monastery was founded by Katarzyna Ligęzina née Kretków in the 1620s for the Carmelite nuns. It was built after a partial reconstruction of the former court of the Lublin voivode, Rafał Leszczyński. The church, bearing the features of the Lublin Renaissance, was consecrated in 1644. In 1807, the Carmelite nuns were transferred to the Carmelite Convent of the Discalced Immaculate Conception of the Blessed Virgin Mary, at the modern S. Staszic Street. Their place was taken by the Discalced Carmelites. The monks lost their church and monastery at Krakowskie Przedmieście, currently at 1 Łokietka Square, in a fire in 1803. After the dissolution of the Discalced Carmelite Order, the Russians took control of a part of the buildings. In 1898–1907 the complex was converted into a prison. The photograph was taken after the renovation carried out in 1899–1903, when a neo-Renaissance attic was added over the bell tower, and the top of the porch was decorated with a polychrome by Władysław Barwicki. In 1918, the Carmelites regained some of the buildings. The remaining constructions, which were under military management, housed, among others, infirmary and police station. 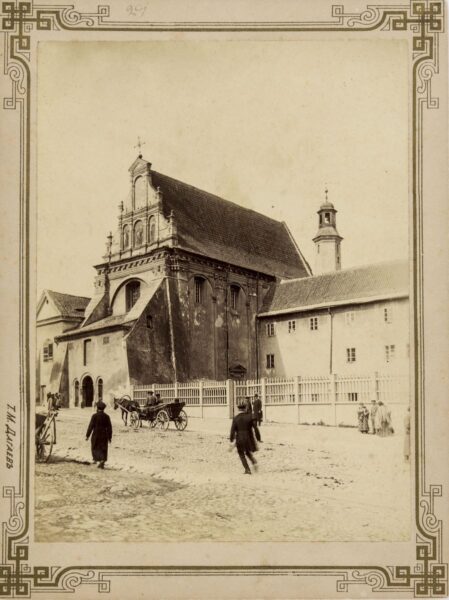 Church of the Conversion of St Paul

The church for the Bernardines brought to Lublin in 1459 was built outside the city walls. At the end of the 15th century, it was a brick building. At the beginning of the 16th century, a brick monastery was erected. All buildings burned down in a fire in 1557. The reconstruction was completed very quickly. In 1569, a thanksgiving service for the Polish-Lithuanian union was celebrated in the church with the participation of King Zygmunt Augustus. In 1602, the building was destroyed as a result of another fire. Again, the church was quickly rebuilt. The temple gained a new Renaissance shape and interior. Jakub Balin and Rudolf Negroni are considered to be the authors of the reconstruction. In 1864, the Bernardine Order in Lublin was dissolved. In 1884, by the decision of Bishop Kazimierz Wnorowski, a parish was established here.